Nobody knows what the future holds, but there are games that capture our imagination and let us explore a world full of possibilities. Nobody Saves The World is an experience where you play as one of six possible characters- each with their own story- fighting against evil in order to save humanity from extinction…

The “Nobody Saves the World” is a game that has been released on Steam. The game is currently available for $19.99. 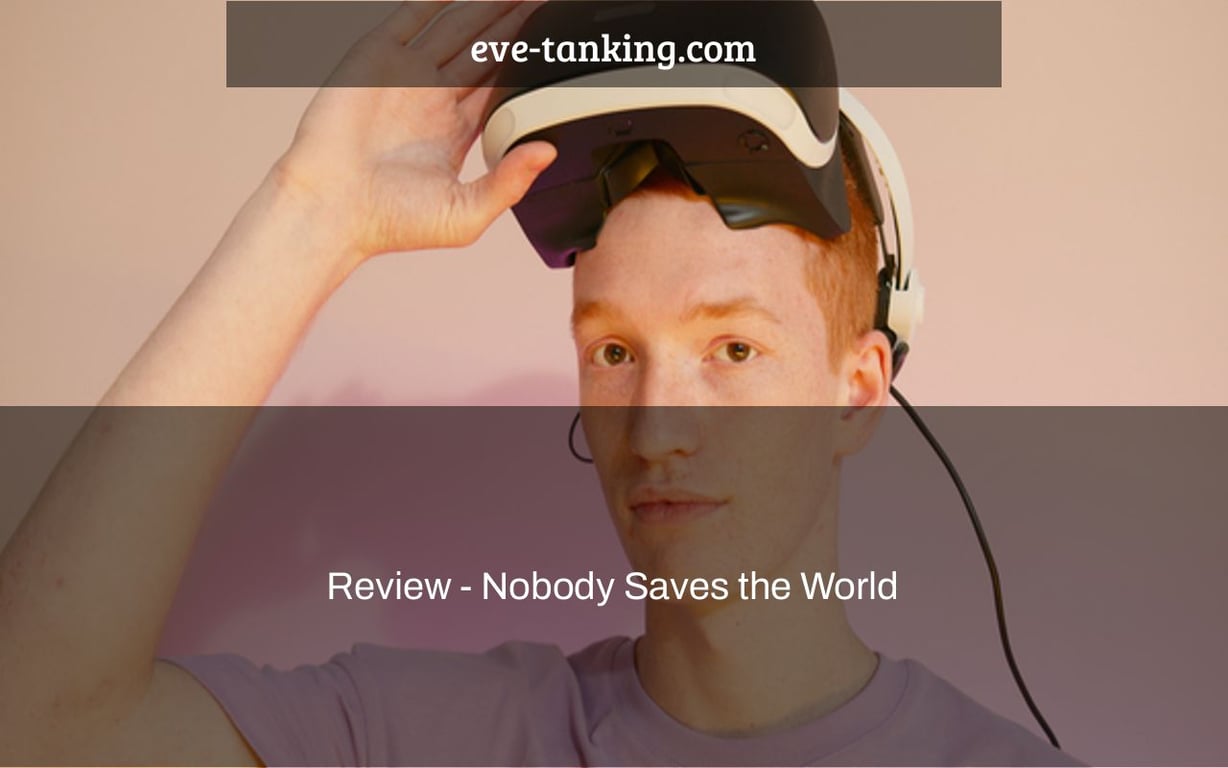 Back in 2013, Drinkbox Studios piqued my interest with its great side-scrolling beat ’em up Guacamelee! They got my attention at that moment since I adore that game, and the sequel was just as good. With their studio brand, they genuinely understand how to take old school design aspects and wrap them in a new and distinctive manner. As a result, when Nobody Saves the World was revealed, I was clearly intrigued. It seemed to be yet another bizarre notion that I had to try, and I’m happy I did since it’s yet another must-play.

Nobody Saves the World tells the story of Nobody. A featureless, pallid, blank slate of a figure who only ceases to be a nobody when you discover a magical wand that can transform Nobody into several Somebodies. Nobody wakes up in a decrepit cabin with no recollection of who he is or what he is wearing. You rapidly learn that the world has been engulfed by a massive disaster, and the single person who can stop it has vanished. You uncover a magic wand that permits you to adopt multiple forms thanks to some clever plot structure and the incompetence of some individuals. You’re pushed into a mission to rescue the planet and figure out who you are at this time.

It’s not as dazzling as I had hoped for the finest wizard in the world.

As I previously said, you will get a wand that will allow you to transform Nobody into other personalities, and this is the game’s fundamental hook. The game is built up in the style of a metroidvania, with some regions, obstacles, and mysteries sealed off until you progress. These regions are restricted off in Nobody Saves the World unless you unlock a certain character. At first, the concept of this made me nervous since in most RPGs, I’d choose a few characters I like and stay with them. However, the level design and ease of play in this game truly pushes you to play as all of the characters.

Here’s an example of a challenge that asks you to shatter wards using Sharp or Dark strikes.

When it comes to obstacles, Nobody Saves the World is all about them, for better or worse. Completing various types of tasks is the only way to proceed. Each character you may transform into will have their own set of tasks that you must perform in order to get XP and basic XP for that character. You may not only level up certain characters, but you can also level up your overall health, mana, and defenses. For example, the slug you may transform into will have tasks that are simpler to begin with, such as “Slow Down 50 Baddies.” This is simple since the slugs’ passive creates a goo trail that slows foes that walk across it. However, the tasks will get more difficult, and they will begin to include other characters’ movements into trials involving other characters.

Because you can’t level up your base level without completing the character challenges, this gameplay idea pushes you to employ all of the characters and attempt changing their moves. Outside of character challenges, there are tasks that just reward base level XP, such as finishing dungeons, killing a particular amount of enemies, unlocking treasures, and so on. You will also be able to join side guilds like as the Thieves, Mages, and Warriors, which will provide you with particular side tasks and objectives to fulfill.

Yes, my nude bodybuilder has decided to join the Thieves Guild… What difference does it make?

The primary task will have you assaulting numerous dungeons across the landscape that have been overrun by the disaster. These provide opportunities to earn upgrade points and conquer more difficult tasks, since foes in more difficult dungeons may use wards that must be broken. To finish them, you’ll need to equip a character with challenges unique to eliminating certain wards. Because wards aren’t present in the open world parts, you’ll only locate them in dungeons. If you need to grind out some difficulties, dungeons are linear with procedurally generated layouts. You’ll have a boss battle when you get to the conclusion, but this is my main complaint with Nobody Saves the World.

Unless there’s a dungeon with a very difficult modifier, they’re a quite simple event. It’s not that being on the easy side is a negative thing; it’s simply that I wish there was a method to modify them myself to boost the benefits. Aside than that, enemy and level designs are often identical. To progress, you must “kill a specific number of foes” or “find a particular number of keys,” or there may be no condition at all. But that is the extent of the diversity available. Then there’s a boss battle, which is either a bigger version of the monsters you’ve been battling all along or enormous waves of regular foes.

With its modifier, the Dead Dragon is difficult, but it’s perfect for farming any Blunt or Dark tasks.

As you solve tasks, you’ll be given a wand, which you may use to access that region’s major dungeon assignment. To open into the main dungeon, for example, you may need to acquire 65 wands. This may be done by finishing any task or by purchasing them from the witch trader for $500 each. These big dungeons are a little more filled out, and they’re where you’ll proceed through the main tale. The other dungeons are often utilized to convey a little about the area’s mythology and people, which I enjoyed even though the dungeons themselves were a little repetitive and, as a result, a little monotonous at times.

The planet, and how it executes all of your forms, is the big star here. I once saved a “dungeon” horse stable, which I was able to return to in my horse form and fell in love with a stunning golden stallion. It was a much more satisfying love tale than Twilight. I had to locate a wrecked UFO with poorly camouflaged aliens and finally clean their UFO. A candy shop that a witch says isn’t meant to attract youngsters, as well as a corrupted vampire palace that has destroyed their way of life. I was constantly ready to keep playing since there are so many fantastic moments inside the universe, the characters, and how brilliantly it employs each of the forms.

Sorry, but the golden stallion already has my horse’s heart.

Nobody Saves the World features a wonderful visual design that is reminiscent of previous DrinkBox Studios games while also maintaining its own flair and personality. The cartoony art direction manages to inject a lot of personality into each scene and character while still appearing stunning. The rich and vivid color palette is complemented by excellent lighting and effects. The world’s designs include wetlands, deserts, jungles, and a variety of strange dungeon themes. The characters in each region, as well as the characters you may shape into, benefit from the design variation. The only criticism I have is that I believe more could have been done with the insides of the dungeon layouts, as well as having more distinct opponents and bosses for each.

The sound design is likewise excellent, but not as memorable as the music and sound effects in Guacamelee! Nobody Saves the World, on the other hand, has a more conventional fairy tale RPG music design that fits its Mexican theme. It’s not that it’s bad; I liked the whimsical melodies while wandering and the more energetic music from the dungeons; it simply didn’t stick with me. However, the many sound effects, including fighting and ambient noises, are really nicely done.

All of the character types are fantastic and provide fresh and exciting ways to play the game.

Nobody Saves the World is a fresh take on the ARPG genre with DrinkBox Studios’ characteristic flair, and I wholeheartedly recommend it. While there are certain aspects of the dungeons that I wish were filled out a little more, this was an adventure that I couldn’t put down. The game did an excellent job of making me want to keep modifying and improving my characters by having their world participation relevant in various ways. There’s also co-op if you want to take on a dungeon with a buddy as a turtle and robot team with dragon and ghost abilities. It’s all up to you, but whatever you select, I’m certain you’ll appreciate it.

On Xbox One, Xbox Series X|S, and PC, Nobody Saves the World is now available.

On the Xbox Series X, the game was reviewed.

The publisher donated a copy of Nobody Saves the World.

Nobody Saves the World is a game that was released on October 13th, 2016. The game is set in a dystopian future where nobody can save the world and it has been overrun by zombies. It’s up to you to find ways to survive this apocalypse. Reference: nobody saves the world reddit.

How To Get It + All Locations –