Star Fox Zero is the newest entry in Nintendo’s venerable Star Fox franchise, and though it was destined for critical failure due to its largely optional add-ons (a trend that will soon become standard practice with future games) there are some things worth taking away from this title. That said, what could the next mainline game take from here?

Star Fox Zero is a game that has been met with mixed reviews. Some people love it, while some people hate it. The next mainline entry in the series could take from Star Fox Zero and make something new. 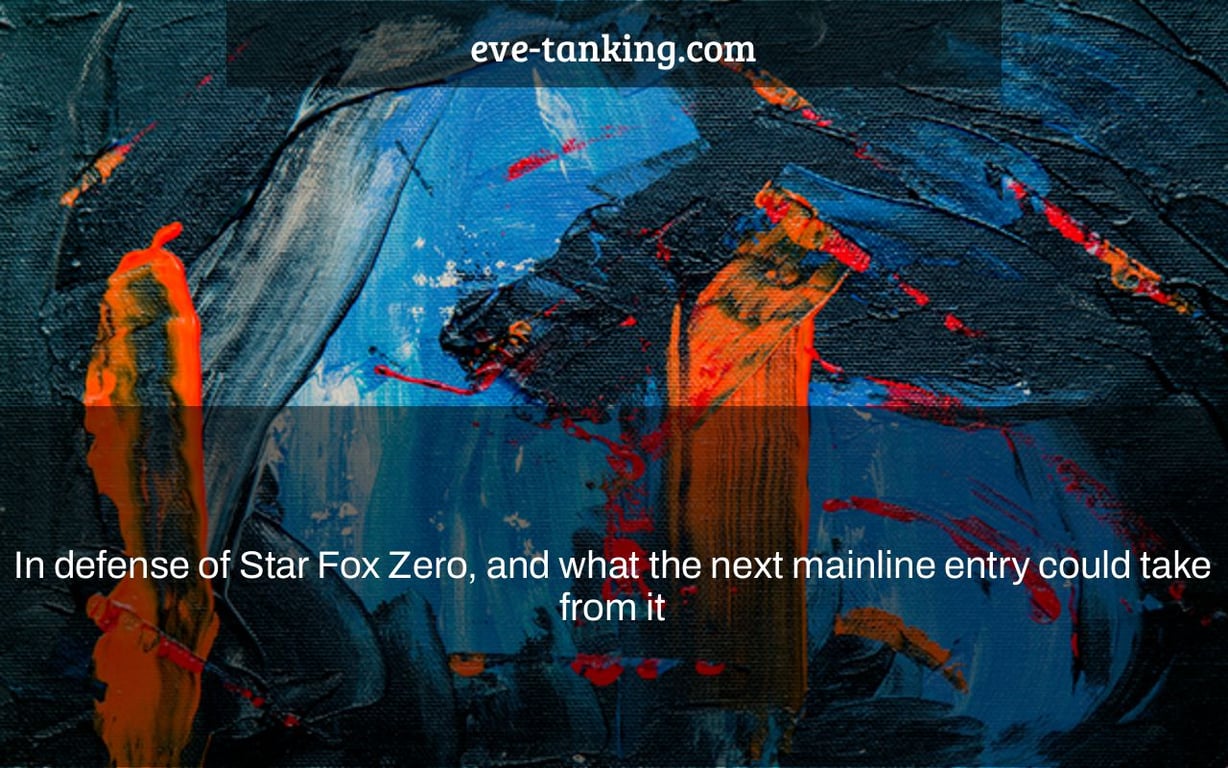 For the first time, I played Star Fox Zero in its entirety. For the purpose of background, I never had the opportunity to play it previously since, by the time the game was out, I had already sold my Wii U because it was clear the platform was a flop and I wanted a new gaming PC instead. Anyway, I was well aware of the differing viewpoints on the game and its controls, but I was eager to play it because it was not only a new Star Fox, which I adore, but it was also being developed by Platinum, one of my favorite developers of all time, and I thought they were a perfect fit for Star Fox. So, after playing the game, I’ve formed my own opinions, and I’d want to share them. The short explanation is that I believe many of the bad comments were overblown or kneejerk responses… but some did have validity.

So, right now, let’s address the elephant in the room: the controls. To be honest, I thought it was completely uncomfortable and ungainly when I first began playing, as did most others. While I believe there is a steep learning curve to teach oneself to glance at both the gamepad and the television during intense action moments, it does become second nature after a while. Comparing how I feel now versus when I started playing, it’s not even a problem for me anymore since I can properly aim with the gamepad if needed and know when to peek at the TV for a better view. I recall suffering a lot with Corneria’s first boss, but today I can take it out in under 10 seconds if I want to. I believe it is understandable that many were uncomfortable with the controls at first and didn’t like them, but I believe that with some time and experience, they will feel completely great. However, I believe the game would have been better served by having the first person perspective available as an option rather than being confined to the gamepad. I believe that most individuals would feel a lot better if they could just switch from first person to third person mode on the television screen (as in swapping on the fly via a button press).

Another aspect of control I believe many overlooked is that you can teach yourself to strike the overwhelming majority of non-boss foes without even glancing at the controller. The targeting reticle seems quite similar to how it operates in Star Fox 64, where the inner reticle deviates from the outside one to give you a good indication of where the lasers will end up. Furthermore, the lasers’ rate of fire is quite quick and numerous, so you may utilize them to gently modify your aim. The only difference is that both reticles are always centered on the gamepad screen, so you know precisely where it goes without any guesswork. You must also lead your shots on distant targets, which is more common here than in 64 due to the game’s larger scope.

The addition of gyro aiming makes it much simpler to target where you want without sacrificing position or mobility. If you wanted to aim in a precise non-centered location in SF64, you had to swerve your Arwing in that direction, which may cause you to collide with anything or put you in an awkward position. If you need to aim with the controller, you may even aim off-screen (from the TV’s viewpoint) in SF0, which offers you an unusually broad field of vision. Any future Star Fox game should feature gyro aim.

The only aspects of the controls that I can’t fully justify are the Right Stick actions. In Arwing mode, you may U-Turn by double-tapping down, or execute a somersault by tapping down then up. The issue is that you must also hold up to boost and down to brake. I can’t tell you how many times I accidently U-Turned or Somersaulted in more tight circumstances when I was frantically tapping to control my pace precisely as I wanted. Even with 100% completion and many hours under my belt, this problem did not improve. The worst thing is that you can do both acts by pressing Down + B and Down + X on the Left Stick. Those weren’t supposed to be actions you could do with the correct stick. This is also why the walker is sometimes difficult to handle; since you must spin the vehicle with the Right stick, you’ll find yourself barrel rolling a lot (double-tapping left or right), particularly when landing on tiny, narrow platforms like the Gigarilla’s back. It creates many more issues than it resolves. Thankfully, pressing Down + B on the left stick allows you to turn 180 degrees, which helps a little. Because you constantly went ahead and simply had to glance at the space in front of you, the Landmaster in SF64 was considerably more forgiving with these controls.

In addition, the gyro calibration was often wrong. I’m not sure whether it’s my gamepad or if there’s anything else I’m missing.

Anyway, now that the contorls have been dealt with, I may go on to other topics. What about the transportation?

Well… The Gyrowing was a complete blunder. Zoness is the one level in the game that I really despise, and I doubt I’m alone in this. The car is extremely sluggish, and there’s no need for it to be that way, particularly without any kind of boost. Deploying and withdrawing Direct-I to hack things creates a lot of dead air between activities, making everything seem like a crawl. I enjoy the notion of Fox going alone and stealthily hacking Androssian gear, but it shouldn’t seem like I’m taking a lifetime to accomplish the level, particularly when practically all of the other levels have time constraints or at the very least extremely quick tasks to fulfill. Thankfully, Zoness is the only level you can complete with the Gyrowing, so it doesn’t have a significant impact on the whole game. I don’t want to see this vehicle appear in a future game, much alone be used for the bulk of a level.

Off-topic, but I find it funny that even the developers understood how horrible the Gyrowing was, since you can finish the whole Zones level with the Arwing and Walker with the hack upgrade, entirely unedited; and you can complete the dang level in less than 3 minutes if you speedrun it! It’s a hidden task that you may discover by teleporting to Zoness from Corneria’s secret exit. You’ll have to defeat Venom the first time to get it, thus you won’t be able to get it on your first playing… However, this most likely indicates they knew you wouldn’t want to play Zoness again. There’s also a little portion in Area 3 where you’re meant to use the Gyrowing (the only other time you use it, by the way) to hack a handful of items, but it’s only a few minutes long. Even yet, once the Walker gets the hacking ability, you may fully bypass acquiring the Gyrowing and skip a good 30 percent of the level by just utilizing it. You can’t avoid utilizing a vehicle you’re required to utilize at any other point in the game. Even if you finish Area 3 without obtaining the Gyrowing, you will be compelled to utilize it when you reach Zoness.

Anyway, there’s the Walker. On paper, I believe the concept for this vehicle is amazing. It enables far more diverse and intriguing level design, which was previously impossible, or at the very least severely limited, with simply the Arwing. The fact you can also infiltrate giant enemy battleships to destroy it from the inside is awesome, and expands on what Star Fox on the SNES tried to do in those few segments that did so. The vehicle also harkens back to Star Fox Assault’s on-foot phases, which I believe the Walker may take even more influence from. The main issue with the Walker in this game (aside from the aforementioned control issues) is that if it’s in an open, outside area, the Arwing is better in every way, shape and form. The Walker should prioritize weapons and offensive capability, whilst the Arwing should prioritize mobility at the expense of laser capability. What if the Walker had a variety of weapons? Sniper, Minigun, Assault Rifle, and so forth. To attain its full potential, it should take more inspiration from Assault. I’d even add opponent characteristics like Anti-Air Defenses to hinder the employment of the Arwing, allowing the Walker to be more effective until the AA is destroyed.

The Landmaster’s metamorphosis into the Gravmaster is also brilliant, allowing the previously limited mobility to thrive by transforming it into a less mobile Arwing. It does a great job at speeding things up in the few levels that use them, and allows for more usage of the overall map so it can be a more interesting experience compared to the rather bogstandard treks in Titania and Macbeth in SF64. Titania alone in this game seemed much more vast than I had anticipated in a Landmaster level. Even with this improvement, I believe the Landmaster may benefit from being a bit quicker in its basic movement speed or focusing more on environmental dangers (like the sinking sand holes and shifting sand speeds in Titania). I also believe that your boost meter should be depleted more quickly while flying in the Gravmaster, since boost recharges incredibly quickly and flying hardly ticks down the boost meter, even when boosting or braking at the same time. Because most risks are near the bottom, there’s minimal incentive to employ the tank form; even the spider drone foes don’t need to be attacked from below because they have a weak spot up above.

So there are the game’s two key elements out of the way. I’ll now quickly discuss additional features of the game that I like and how they should be included in the future Star Fox.

With the new year approaching and a slew of new game releases on the horizon, it’s time to take a peek forward at some of the year’s most anticipated titles. There are some fantastic games coming out in the next year for PC, Xbox, PS5, and all of your other favorite gaming platforms.

Reggie Fils-Aimé: Nintendo Has Not Left F-Zero Behind